In order for Linux GUI apps to connect to X410, you need to set the DISPLAY environment variable. You can set it just before launching your Linux GUI apps or have it permanently added to your login shell script (~/.bashrc):

Many Linux GUI apps use the D-Bus for inter-process communication (IPC). In order to check if it's properly installed, try running the following commands after launching X410 (if your version of 'dbus-launch' doesn't support the "--exit-with-x11" option, you can also try "--exit-with-session" option):

If you're getting a "command not found" error, install the 'dbus-x11' package:

If you're getting the following error:

Session lifetime based on X11 requested, but machine UUID unavailable: D-Bus library appears to be incorrectly set up: see the manual page for dbus-uuidgen to correct this issue. (Failed to open "/var/lib/dbus/machine-id": No such file or directory; UUID file '/etc/machine-id' should contain a hex string of length 32, not length 0, with no other text).

When you launch a Linux GUI desktop environment such as Xfce4, you don't need to worry about 'dbus-launch'. However, if you're launching a Linux GUI app directly and getting errors about 'dbus-daemon', try running the 'dbus-launch' as mentioned above before launching your Linux GUI app. If it works, you can permanently add it to your batch file or script (ex. Opening a genuine Linux terminal emulator (WSL) directly from Windows File Explorer). 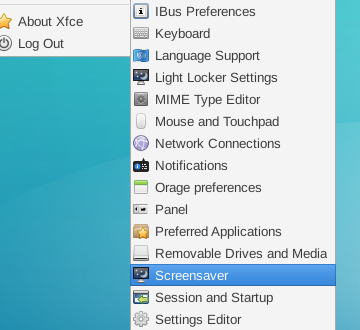 So if you notice screen savers and/or lockers are installed, we highly recommend removing them instead of just disabling them. For example, while installing the Xfce4 package in Ubuntu, it automatically installs 'xscreensaver' and adds a 'Screensaver' settings shortcut. You can remove it by executing the following command:

Removing the package also automatically removes the shortcut. The following lists removing commands for some of the popular screen savers and lockers for Ubuntu:

In case you forgot about the screen locker and get a black screen, don't panic! You can 'kill' the locker and get back to your desktop by using the 'ps' and 'kill' command from another Linux console.

You're now ready to run your Linux GUI apps! Just make sure X410 is running before launching them.