WSL doesn't currently support sound devices. Hence when you open a GUI desktop or apps in X410, you will not hear anything other than the basic system bells (ex. CTRL+G). We hope Microsoft add the support in the future version of WSL.

Meanwhile... there is a workaround...

PulseAudio version 1.1 was available for Windows as of this writing; it's indeed an old version but it works on Windows 10.

STEP 2 Unzip the file from Step 1 to a folder

Please note that for security and privacy concerns Windows 10 (April 2018 Update) seems to restrict the access to audio recording devices. You can probably somehow override this feature, but since we just want to hear the sound we're simply disabling it from the PulseAudio server by adding the 'record=0'.

This enables the PulseAudio server to accept connections only from 127.0.0.1 via TCP.

If this option is set to a non negative value, the server automatically terminates itself when the last client disconnects and the time is passed more than this option (in seconds).

The 'pulseaudio.exe' is the executable for PulseAudio server (also referred to as a daemon) that we need for our Linux apps. 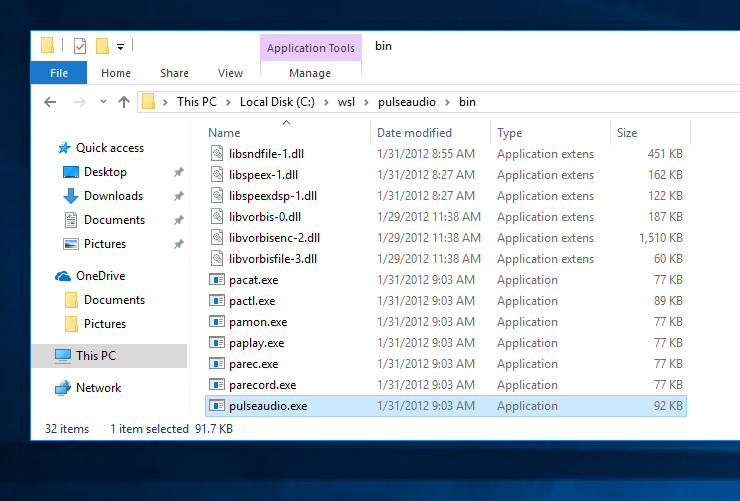 If there was an error, the server exits immediately. If that's the case, go to Step 3 and make sure you've changed the lines correctly.

Press CTRL+C to stop the server.

For example, if you're using Ubuntu and created a batch file as mentioned in 'Customizing Xfce Desktop for Ubuntu (WSL)', try modifying it as shown below:

You need to adjust the path to 'pulseaudio.exe' according to your setup.

In order to let Linux apps know there is a PulseAudio server running at 127.0.0.1, we need to export the 'PULSE_SERVER' environment variable.

Pulseaudio.exe has its own '--kill' command line switch for terminating the running instance. But it doesn't seem to work in Windows 10.